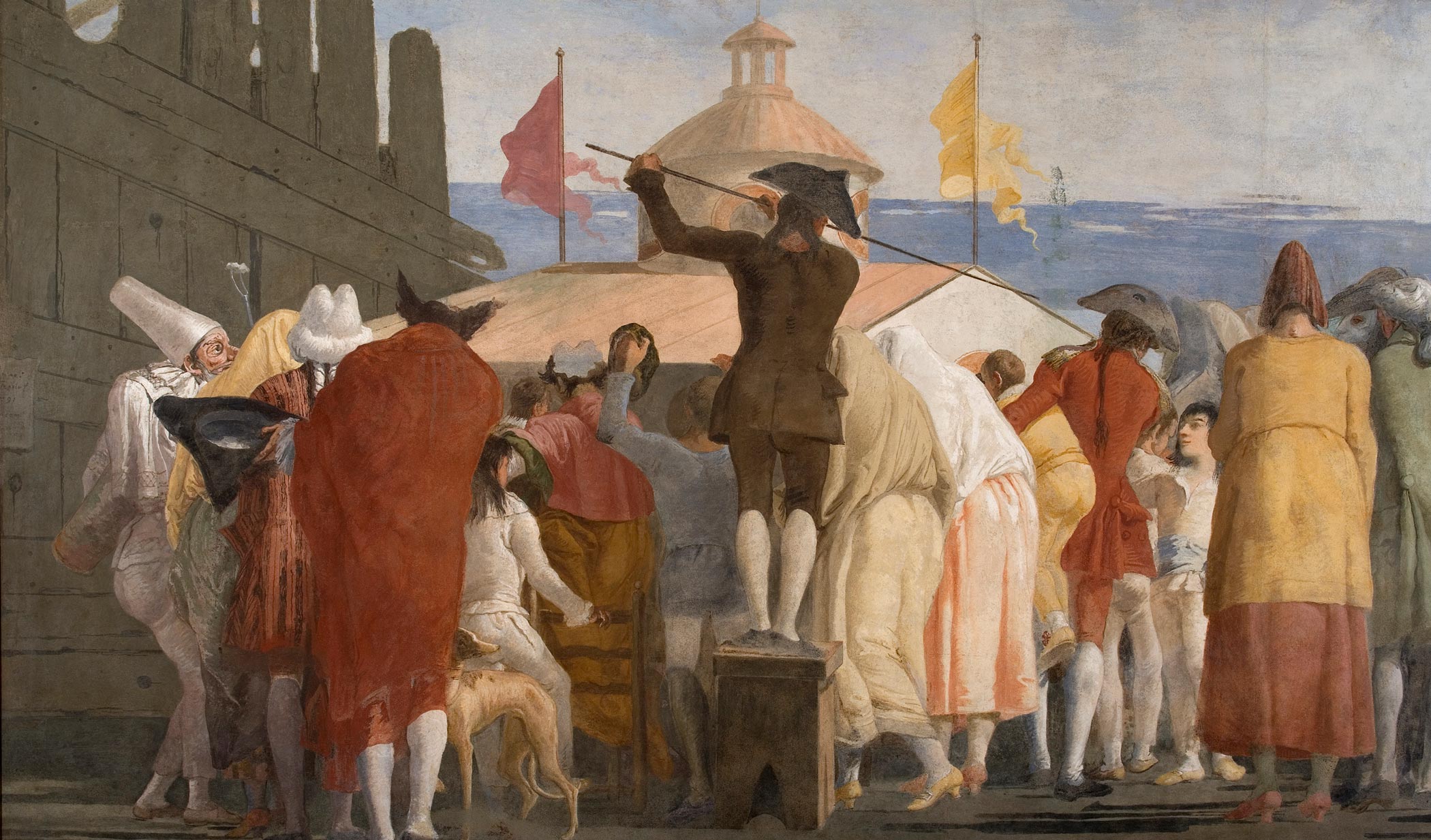 When friends ask me for advice on what to see in Venice, I immediately say: Giandomenico Tiepolo’s frescoes in the Ca’ Rezzonico. And I make the most of the occasion to go with them, then I have an excuse to go back there myself. I will try to convince you, too, with seven good reasons.

Imagine a man who travels all around Europe with his father painting frescoes in churches and stately homes. One day his father dies. He goes home. He will spend the rest of his life there. It is 1770. From then on he becomes his own patron: ‘What shall I paint now, on the walls of my house? What do I want to see in my rooms?’ These frescoes were on the walls of Tiepolo’s rural residence at Zianigo. They are the pictures that Giandomenico wanted to paint for his own eyes, after a life spent painting those that others asked him for.

There is a crowd of people in the square. They are lining up to see the Mondo Novo: a kind of magic lantern, an optical effect that shows people panoramas of the far-off Americas. The world has embarked in the form of pictures, to come to the city of spectators. (And, think carefully, visitor, these frescoes have also come to you. They were detached from their original place a century ago, initially because they were to have been sold abroad, to then end up in this museum.)

That crowd seen from behind is our contemporary. It is from the time when the human race was turned into a spectator. And the characteristic of the spectator is that of turning his back. Why? When everyone looks at the same thing, everyone loses their individuality, no longer has a face. Homo sapiens becomes homo spectans. The painter who paints them is no longer able to look them in the face, because they are captivated by another image. They look elsewhere. The others become backs when they are enchanted by a show that doesn’t interest us. And you? You who are looking at this fresco, how are you standing?

4. The death of painting

Art historians say that some have wanted to identify Giambattista and Giandomenico Tiepolo as the aristocratic figures seen in profile in the big fresco of the Mondo Novo. There is nothing that documents this, but it would be nice if it were true. The city’s two most important painters run to the square to see what has attracted all that crowd. And there they find that their mortal competitor has been born, a new kind of picture, which uses a very new ingredient beyond paint: light! From now on pictures will blend light in with the other painting and visual substances. They will no longer be restricted to representing it by painting reflections and shadows, flares and chiaroscuro, but will capture it, show it, throw it into the eyes of the spectators: magic lantern, new world, photography, cinema, television, computer...

Look at the details of the minuet between the ladies’ man with the wig and the girl dressed in white. She has such delicate features. An enormous hat rests on that adorable little head: it seems like a hot air balloon full of lightness, but rather... Her tapering, slender little waist, with the excruciatingly tight bust, is the point of a nail stuck powerfully into the skirt. Look at the fall of the fabric: it shows in a not even very disguised way three or four enormous radial vaginas. That so sweet little lady is a white bearer of eroticism, a cloud of unchecked candour, of obscene purity.

Who are all these Punchinellos? There are those who have written that they are the new society after the French Revolution, or street artists, anarchists, non-conformists; barbarians who occupy the stage that had been that of the nobility. They are the new protagonists of life, happy and dissolute. Where does all that wild energy come from? Was it simmering beneath the minuets and ceremonies of the aristocracy? Is it the too long repressed unconscious that invades the world? Look at them. They amuse themselves on the swing, they sprawl on the ground after an orgy, they do somersaults with their heads down: just as the satyrs and centaurs did before History. Compare them to the wonderful white-grey frescoes in false bas-relief that portray very violent mythological scenes: the poses of the Punchinellos and the satyrs are the same, History has gone back to when the world was lawless and women were abducted, a club was used for self defence. And yet. Look closer. Rest your eyes on the backgrounds, on the corner at the bottom left of the rapist centaur who is fleeing from the slaughtering satyr. There are very civilised bell towers, houses, people going past who do not notice anything. Pre-history is contemporary, atrocity is a couple of steps from the village. The world has always been ferocious, it still is, it is now. Civilisation has never existed.

7. The animals escaped from the pictures

On which side are the animals? The greyhound that was accompanying the aristocratic promenade is now with the drunk Punchinello. The puppy with the plumed tail was barking at the noble’s minuet. Then he was taken away by the ladies’ man. In the end he has gone back to doing the same things as before, this time barking at the dance of the Punchinellos. He has changed master, like the greyhound, but life for him has remained the same, captured by an image, in the same pose, in the same corner at bottom left. The little birds have tried to escape the sparrow hawk that is chasing them, trying to get over a frame. The only one that has succeeded is a parrot. Who knows what magic word it has recited to manage to perch on the jamb of that door, on the wall, beyond the enclosure of the picture?

Tiziano Scarpa is an Italian writer, playwright and poet. Among his most famous works there is Stabat mater, book winning of the Strega Prize in 2009

- Translation in English by David Graham -