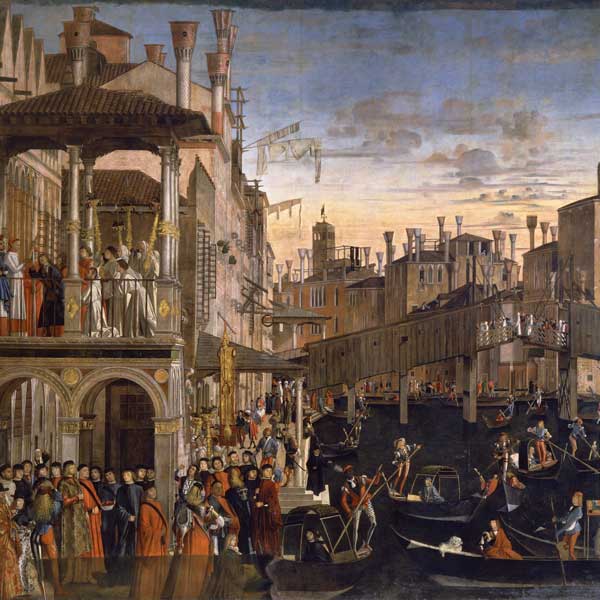 A Miracle in Venice

It is almost as if the eye is supposed to miss the miracle that Vittore Carpaccio painted in Miracle of the True Cross at the Rialto Bridge. The miraculous healing of a possessed man by a piece of wood from Jesus Christ’s cross is lost in the chaos of daily Venetian life. The artist has pushed it to the left then propped the event up onto the first floor of the Palazzo in San Silvestro. The eye has to strain to find it amidst the dizzying activity on the Grand Canal. Perhaps Carpaccio wanted to force the viewer to slow down and search for the moment. Perhaps the painter believed that we should not be able to stumble so easily onto such a wondrous act. To behold this extraordinary moment, Carpaccio seems to imply, should require more than ordinary human effort. And so we stand and pause and seek until we find it. It is understandable, then, to lose sight of the other notable event that’s unfolding in plain view, directly in front of us, gliding across the inky waters of the Grand Canal as if this were just another normal day: a splendidly dressed black gondolier – one of two in the painting – rowing away from the palazzo, his back to the unfolding miracle, his youthful face turned somewhere we cannot see while his patron gazes at us, checking to make sure that we notice his rower.

Between 1494 and 1502, the Scuola Grande di San Giovanni Evangelista, one of the wealthiest and most powerful confraternities in Venice, commissioned some of the city’s most respected painters of that period to create nine works of art depicting the Miracles of the Holy Cross. Each of the commissioned pieces represented one of the stories about miraculous events performed by the relic. Miracle of the True Cross at the Rialto Bridge was painted around 1494. By then, Carpaccio’s black gondoliers would not have been the only sub-Saharan Africans in Venice. The Portuguese had begun their voyages to West Africa in 1440 and were returning with cargoes of enslaved Africans. Those ships that docked in Venice would unload human beings to be sold in slave markets across Italy and throughout Europe. Many were bought by Venetian families and became domestic servants. Some of the enslaved Africans would also serve as household gondoliers, the equivalent of coachmen in other cities.

And if you, O poet, tell a story with your pen, the painter with his brush can tell it more easily, with simpler completeness.

This is Leonardo da Vinci, reaching through the centuries to remind us that paintings may capture a moment more completely, and more sharply than the written word. Perhaps he was right in this case. The written records of African lives in early Venice are scarce. It is difficult to determine who was Venetian and who was a non-Venetian resident simply by looking at how people were listed in official documents. Some records of manumissions and sales, as well as court records and deeds offer us fragments of information about the lives of sub-Saharan Africans who were a vital part of Venetian society. A very few have been pulled out of oblivion and we know them by their names: Bartolomeo, Cristoforo, Zanetto, Giorgio, Marco, Maria, Zuan, ser Giovanni, Rosa, Andrea, Paladino. But nearly everything else about them has been lost. All we have are those brief glimpses in paintings: a human life attached like an afterthought to a miraculous event.

Now tell me, Leonardo da Vinci also says, which is the nearer to the actual man; the name of man or the image of the man? The name of man differs in different countries, but his form is never changed but by death.

Carpaccio’s painting captures the stories intersecting on one day in Venice, all those ordinary and extraordinary events that leave one man healed and two others rowing calmly towards their destinations. It is a visual record that opens a window to a larger question about Venetian life and hints at what historians are now beginning to uncover: that there has been a population of black Africans in Venice since at least the mid-14th century. That a portion of them, perhaps even a very visible number, were gondoliers. That they were often enslaved, but that some earned their freedom or were set free in the wills and deeds of those who owned them. That they married and had children, and those children were born in Venice and found their own ways into Venetian, Italian, and European life. Carpaccio says it without using any words: Africans were here, and they have been here for a long, long time.

But there is more in this special Sala of the Gallerie dell’Accademia. Turn to Gentile Bellini’s Miracle of the True Cross at the Bridge of S. Lorenzo. Bellini’s work, glowing with a soft light, sits like a silent witness and companion to that lively, chaotic day depicted by Carpaccio. In Bellini’s painting, made six years after Carpaccio’s, the relic of the true cross has fallen into the waters and several of the faithful try to get the relic out. It does not sink, and this miraculous fact brings many of the spectators to their knees, stunned and prayerful. The action is plain for us to see. Our eyes can follow the unfolding drama almost in sequence: from front and center to the left, then along same path the procession was taking over the bridge to the bottom of the steps. Then it is simple to just follow the trail of shimmering white robes to make a leap into the boat where a white-clad priest stands with folded hands, staring at the floating relic.

We can go almost full circle without noticing the black man standing on a ledge to the far right. Set so far apart from the circular momentum of the action, he is invisible. But there he is, nearly naked, a dark-skinned figure staring reluctantly at the water with what looks like a maid behind him. She is the one who is staring at us, a hand jutting out over the ledge where she stands, perhaps to stop the African’s jump or to push him in. Bellini offers a less romantic suggestion of what life might have been like for Africans in Venice. Where Carpaccio’s gondoliers are dressed in finery and elegant clothing, the near-nakedness of Bellini’s diver is stark, a hard slap against any inclination to romanticize the life of a sub-Saharan African during that time. This man is far from the action, isolated and an outsider: marginal.

It would be easy to dismiss this man, and those black gondoliers, and the entire black population of early Venice as an unnatural, un-Venetian element of Italian society. But what is a miracle? It is an event that cannot be explained by natural or scientific laws, certainly. But it is also an extraordinary event. It is also an outstanding example of something, something such as a man taken forcibly from his home, rowing across a canal or stepping on a ledge, always moving through the day without ever forgetting his desire and his right to be free.