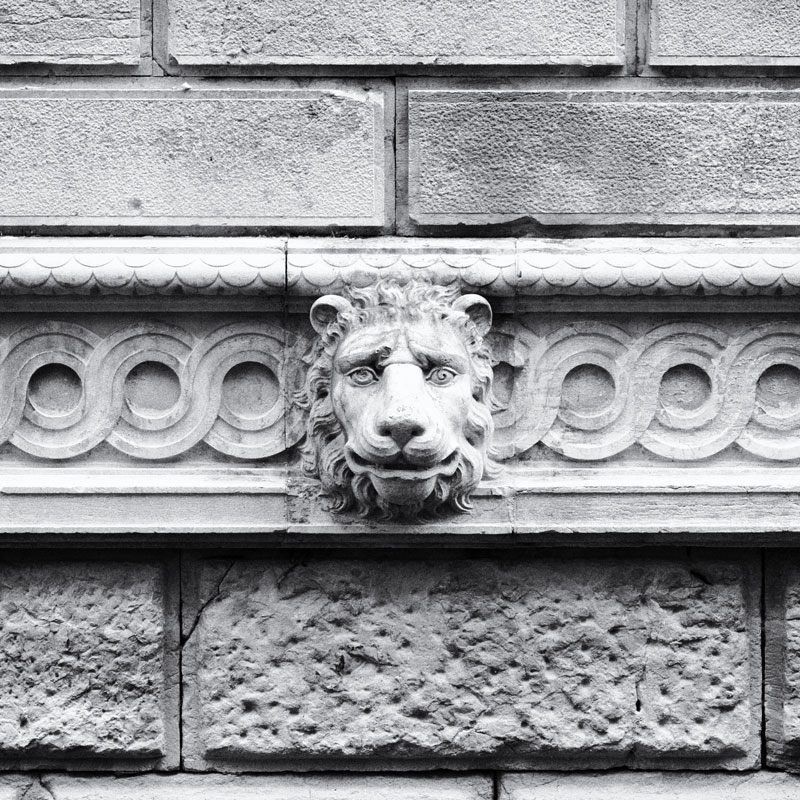 Venice as book: an attempt at reading

This text is excerpted from Alberto Manguel’s
“The Reader as Traveller, The City as Book.” This essay
originated from a project promoted by the international literary festival Incroci di civiltà a Venezia – jointly organized by Ca’ Foscari University of Venice and the City of Venice –
and the Fondazione Musei Civici Venezia. Manguel’s full text
will be published in the series “Incroci di civiltà-Fondazione
Musei Civici” by a prominent Venetian press.

In the Museo Correr is a stone slab, no doubt less notable and less prestigious than the magnificent paintings and sculptures and bric-à-brac related to the history of Venice that the noble institution houses. Set originally above the door of the bell-tower of the church of Sant-Aponal, it depicts a lion’s face crowning an inscription that explains that here could be deposited denounciations against Venetian tax evaders, “privately and in secret.” The lion’s frowning features and puffed stone cheeks are quite human, and the stylized mane and ears that frame the face have something curiously botanical about them, so that the creature seems to partake of all three kingdoms, animal, vegetable and mineral1. The maw is a horizontal slit, set to “read” the tell-tale reports. When the French troops invaded Venice in May 1797, many of similar bocche di leone and many winged lions were chiselled away from the façades of public and private buildings; a number survived perhaps because the mason charged with the iconoclastic mission was more faithful to the Republic than to her enemies.

The bocca di leone in the Museo Correr stands as a symbol of secrets betrayed, of betrayals kept secret, and of the system by which Venice could maintain its peculiar system of democratic autocracy, abhorrent to the autocratic Napoleon. The lion stands also, and most famously, as Mark the Evangelist’s familiar, and of course as Venice itself, prima inter pares in the bestiary of nations. There is no doubt more to read in the depictions. There always is.

Bas and haut-reliefs, gargoyles, banners, coats-of-arms, fountain decorations, mosaics, stained glass windows, capitals, wellheads, embrasures, keystones, single sculptures and paintings: hardly anything in the city is deemed unfit for the lion’s presence. Andante, with his head shown frontally or foreshortened, or sitting on his haunches, like an extectant domestic animal; reduced like the Chesire Cat to almost nothing but his grin, or crowding his entire muscled body inside a gilded and opulent frame; stamping his outline in official ex-libris or enshrined in plastic bells with artificial snow made in China, the lion is everywhere in Venice. And in every case, whether in his own beastly presence or metonymically reflected in his trappings and surroundings, the lion of St Mark always stands for more than any single reading presumes. [...]

As any traveller knows, maps are useless in Venice. Only the repeated experience of its pavements and bridges, its campi and glimmering façades allow any knowledge of its meandering coherence. Getting to know Venice entails losing yourself in it like the Romantics spoke of losing yourself in a book. A true Venice connoisseur, if led blindfolded through the city, will always know where he finds himself, recognizing by touch or smell or sound, reading the city with his mind’s eye, every twist and every turn of its lay-out.

The Talmud too is mapless and yet a constant and wise reader will know what lies on every page, both through memory and force of habit. In an astonishing Yeshivah reading test, the Talmud is opened at random and a pin is placed on any given word. The reader undergoing the examination would be asked what word was in the same place on any other page. Once he had given his answer, the examiner would leaf through the volume until it reached the page mentioned. If the reader was a true scholar, someone who had “lost himself in the Talmud” and was therefore capable of visualizing the whole text in his head, the answer would be proved correct. A scholar who demonstrated photographic recall was known as Shass Pollak, from Shass, the six orders of the Talmud, and Pollak, “Polish”2. A Shass Pollak, a true reader of the Talmud, knows always where he finds himself.

In the thirteenth century, Saint Bonaventure, noted that after God created the world through the Word, He perceived that it appeared dead on the page, and “He found it therefore necessary that another book should illuminate the first in order to show the meaning of things.” Bonaventure concludes: “This is the Book of Scripture that shows the similarities, the properties and the meaning of things as they are written in the Book of the World.3” For Bonaventure, as for the Talmudists, one book (the Bible) allows for the reading of the other book (the World) and both contain in essence the same text. The Talmudic commentaries continue to copy that text in other words, clarifying and expanding, producing in time a layering of readings that recognizes in the Book of the World a vast, ongoing palimpsest. In this manner, reading advances in two directions: burrowing towards the universal core text in an attempt to fathom it, and reaching out to the generation of readers to come with an ever-new individuated text which adds itself endlessly to the pile.

Perhaps without acknowledging this process of individuation as its own, Venice too exists in the tension between the two reading impulses. On the one hand, few cities are so blatant about their mythology and their history. Venice demands at first sight an exploration of its imaginative roots, in earth and water and in stone and deeds, a deep retracing of every step a visitor takes, following its canals down into its legendary beginnings. On the other, it is through the succession of historical readings that Venice wants to identify itself in the present, discarding every new reading, which at first might appear illuminating, as repetitive, banal and commonplace (“The great genre painting which is Venice...” said Arthur Symons) and asking for yet another one. There is no satisfying Venice.

Saint John, the same Saint John who wisely declared that “In the beginning was the Word”, tells us not to love the world nor the things that are in the world because “all that is in the world, the lust of the flesh, and the lust of the eyes, and the pride of life, is not of the Father, but of the world.4” And yet, the Word that names to create and the word that is read to bring life to what has been created, should not lose sight of the world itself. Pulling the reader in two opposite directions at once, towards the theoretical city of history books and towards the imaginary city of the stories and pictures, all too often in the process, Venice itself (like the world of stone and flesh) gets somehow lost.

Alberto Manguel (Buenos Aires, 1948) is a writer, essayist, translator and editor of international fame. He has written many prize-winning books.