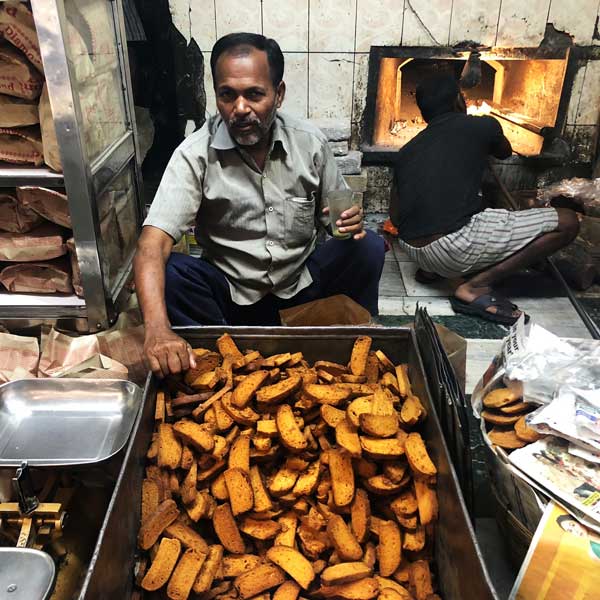 As a hyperlocal writer meandering daily through Delhi streets with my Smartphone, I’m always discovering experiences exclusive to those particular lanes and their dwellers. I’ve often done the same in the campos and calles of Venice, a sort of second home. Of course, these two historic cities are as different as two planets. Even so, sometimes I have found them paralleling each other in most unexpected and intimate ways. Proving that people and places share a lot with each other despite permeated with their own unique identities. Here are a few parallel tales of the two places.

Just about any Old Delhi resident will pronounce the same verdict. The very best rusk, or ‘paapey’ as it is popularly known, have always been created at the family-owned Diamond Bakery and nowhere else. More than 100 years old, the popular bakery was founded the year World War 1 started. It sticks to old-fashioned techniques for producing rusk that are unmatched for crispness. It doesn’t use ovens at all. Instead it sticks to the traditional wood-fired bhatti with a furnace so large that 30 trays can be inserted at any given time. The finished product is so vulnerable that crispness disappears the moment the rusk is dipped in a glass of thick milky chai. In its dimly lit kitchen the lungi-clad kaarigars kneading the dough look like figures from 17th century Dutch paintings. Almost all these employees say they sleep in the shop at night.

Meet the family. Mummy Giusi. Papa Davide. Their shy son, Nicolo. And his cheery girlfriend, Eleonora. Together they run the only old-fashioned bakery in the ancient Jewish district of Venice. The family is catholic but every product in their little establishment is prepared in obedience to the Jewish dietary laws. Mummy Giusi confesses of never having pondered on words like ‘Talmud’ and ‘Torah’ but she knows that you can’t mix meat with milk, thank you very much.
The family lives far from the ghetto in the immensely picturesque Mestre, a very Un-Venetian area with no canals and no tourists. Papa Davide gets up from his bed every night at half past one and boards the bus to Piazzale Roma from where he walks to the bakery to start the ovens. The rest of the folk arrive a few hours later. Their day passes in a blur of breads, buns and customers-friendly rabbis, chatty regulars and shy tourists.

“That Singer is more than a hundred years old,” says shoemaker Jawaharlal Sherawat, gesturing towards the rusty black sewing machine installed behind him. “And this ladder is 80 years old.” His footwear workshop is ensconced in an old, crumbling, half-abandoned mansion. It is as crammed and dusty as a museum’s ignored warehouse. The shelves and closets picturesquely betray the ravages of a weather-beaten time. Some of the precious furniture is treated as if it is nothing but junk. The only new thing here appears to be a wall decked with colorful jootis (shoes) that Mr Sherawat made recently. Scraping off excessive wood from the sole of a shoe-in-progress, Mr Sherawat suddenly pauses and starts making a calculation on his fingers. A minute later he concludes that his father set up the business “when India was still ruled by angrez (the British).” In his seventies, Mr Sherawat himself is like a monument. The elderly man’s children have strayed to other professions — his daughter is a lawyer. Mr Sherawat mutters that his hands pain quite often these days maybe “because I’m now too old and frail.” The workshop shall end with him.

I meet Emilio Piacentini, a wood-carver, in one afternoon inside his deliciously shabby shop — it is cluttered with all sorts of wood things, from mirror frames to cupboards to wooden chandeliers. In his late 70s, Mr Piacentini is among the half-a-dozen aging woodcarvers left in the city. The paint is peeling off the walls, showing red bricks beneath. The long work-desk is lined with dozens of tools. The woodcarver is in the middle of a crime thriller. Mr Piacentini, who studied his craft in an art school for five years, says, “I’m very proud to do things that nobody can do anymore today.” He then opens a drawer and takes out an old poster of a gondola, saying, “I had carved the designs of this boat many years ago. It was gifted by the mayor of Venice to a city in Canada.” Mr Piacentini’s shop has somehow survived to this day. Its future is difficult to imagine. The elderly man’s wife died some years ago and his only daughter is a senior executive in a courier company. Sitting beside his desk, the ghetto’s only woodcarver says, “I like my work. It brings me joy.” He then picks up his crime thriller.

Rendezvous with the sky

Delhi is rightly chastised for its profound pollution. There are those ghastly days when the very air we breathe is accursed. Even so. There can also be something akin to art in the city skies, at least when viewed in the winter season at certain hours and specific locations. Such as the platform at Vaishali metro station at around 5:30 pm just after sunset. This evening there’s still light and the sky is imbued with various tints and tones that could well be the brush strokes of Monet or Turner. The very atmosphere seems to have been photoshopped into a texture of pointillist dots. But these bright shadings dissolve into approaching darkness even as you gaze. As the minutes tick by, the fragility of this fleeting beauty evokes a sense of profound loss.
Indeed, landscape paintings by impressionist masters evoke these same feelings. Their conception of sky doesn’t at all resemble “the real thing”. But, rather, relates to the inner sense of the master himself — his “third eye”. And so it stands to reason that the post-sunset sky at Vaishali Metro — as seen from inside the platform — is depicting that very kind of artwork: To be embraced and treasured for the few minutes that it’s there. It’s a memorable moment.

The sky is everywhere. Even the wet sea is looking like the sky.
It is evening. The Delhi Walla is on the beach in Lido, a narrow island in Venice that was the setting of Thomas Mann’s Death in Venice.
The universe is quiet. The waves of the Adriatic Sea are making gentle splashing sounds. An abandoned building stands a few yards away from the beach. It has minarets and a dome. This is Hotel Excelsior; it is closed for the season, and will re-open in the summer.
A few minutes later, the evening comes nearer. The sun starts to go down in the western sky. The moon climbs over the Adriatic. The entire sky and the entire sea are drenched in a strange beautiful shade of pink and blue. The blue is gradually receding, giving way to the pink.
Soon, the night will arrive.
Wading further into the cold waters, I come across a fallen bicycle. It is a very, very fragile moment.

Since 2007, Mayank Austen Soofi has been collecting hundreds of stories taking place in Delhi, through writing and photography, for his acclaimed website The Delhi Walla. Mayank is also a daily columnist for the Hindustan Times, the author of Nobody Can Love You More: Life in Delhi’s Red Light District (Penguin Books 2012) and the The Delhi Walla guidebooks (HarperCollins, 2010-2011).