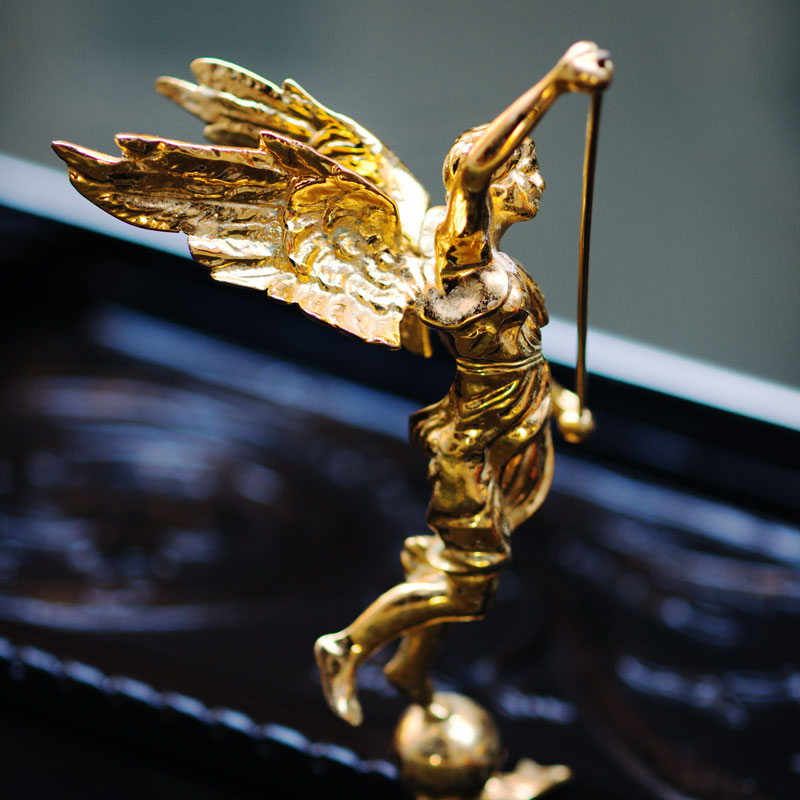 Wobble.
Wibblewobble. Wibblewobblewibblewobble.
I have finally plucked up the courage.
It is my tenth visit to Venice and my first time in a gondola. As I drink my coffee
early in the morning on the corner of the Procuratie Nuove, they stand there beside me: the gondoliers. Big discussions about yesterday’s game in their impenetrable Venetian dialect. It is cold on the water, and a hot cappuccio helps. Their sleek, black bird boats are lined up outside, the heads of the birds (they are birds’ heads – just take a good look) pointing at the island where I am staying. Why have
I never wanted to try it before? Because it is
the ultimate Venetian cliché?

That would be childish. Was it the expressions on the
faces of the people in the gondolas? So what is it about those faces? The insufferable bliss of finally having done it, the absolute Venetian initiation, something that means you will always belong there? Into the gondola, along with Thomas Mann, Marcel Proust, Paul Morand, Henry James, Ezra Pound, Louis Couperus? ‘Ich bin auch ein Berliner’? Something along those lines? Or if our neighbours in Kansas, Bielefeld, Wakayama, Novosibirsk, Barneveld, wherever, could see us now – is it that expression? It is as though, down there on the water, they have draped the entire city around themselves like a cloak, in a still yet swaying moment of fulfilment, with undulating, watery whispers all around in the quieter canals, and an invisible man behind them, the ferryman with his strong, rhythmic movements. Most people do not manage to find the correct facial expression, try as they might. This can only be because they know they are going nowhere and that they will soon arrive back at their point of departure. So what kind
of expression should you wear when the people in the vaporetto, who are actually going somewhere, look at you?

My previous experience extended no further than
the traghetto, which is also a gondola, but travels only
from one side of the Canal Grande to the other.
A shaky climb aboard, the ferryman’s steady hand taking
your arm, then attempting to stand firm and not lose your balance, or sitting on the narrow plank and not losing face. Face and balance, that’s what it’s about. A trip in a gondola
– no, I had never done it before.

Last year, when it snowed in Venice and we had a small apartment near Campo San Samuele, on an alleyway in the back part of what must once have been a grand palazzo (a dark, hidden space behind bars, with a dog that barked whenever we came in, and hardly any view of the water),
I had seen Japanese people floating past early in the morning, huddled beneath umbrellas, snow on their hats and scarves, beaming with joy. The gondolier sang about the sun as he wiped the snow out of his eyes. O sole mio. I couldn’t help but admire him. The boat passed by slowly and I knew they would never forget this ride. I wished I knew the Japanese word for ‘never’. If you’ve never been in a gondola, you’ve never been to Venice. Everyone took a photograph of everyone else: proof. You buy the holiday in Japan, complete with your gondola trip. But was that any reason for me not to do it? Sodden Chinese people in the rain, Americans with a bottle of prosecco? I had tried to find a rational excuse for my foolishness: a gondola is just a means of transportation, which you take when you are going somewhere, as in the old days before there were vaporettos. Just drifting about on the water for a while was surely not the intention, even though I have no problems wandering aimlessly around the city on foot.
An even blacker gondola than usual, bearing a coffin beneath a gold-embroidered cloth, on its way to San Michele,
the island of the dead – that was real, the essence of transportation. Everything else was tourism, affectation, theatre, meant for other people.

And now? Now we were ourselves other people and
we sat in a gondola, that shaky climb aboard, oops, too heavy, boat starts to tilt, but the experienced hand assists the
clumsy bodies, deposits them on a cushion, so the journey can begin and the world is instantly transformed.
Everything happens above you now, and you see not faces on the adjacent quays, but shoes, as the buildings stretch out and you discover all kinds of things you never noticed before.
A gentle rocking holds sway over the city, and you
see the walls as living skin, injuries, wounds, scars, healing, old age, history, black seaweed, green seaweed, the mysterious underside of bridges, marble and masonry,
other boats, life on the waves in a city of stone and water.
Quietly, the gondolier calls out the names of churches and buildings like an old priest reciting a litany to which you do not have to listen. I make a few attempts to work out where
we are on the map but soon lose track. Sometimes, when we go around a sharp corner, he lets out a loud ‘Oye!’ as though we are in mortal danger, but I have long since surrendered myself and, like a child in the womb, I listen to the murmuring of the amniotic waters and wish never to be born.

Cees Nooteboom is a Dutch novelist, poet and journalist. He has won numerous literary awards and has been mentioned as a candidate for the Nobel Prize in literature

The full article is published on www.citybooks.eu, an initiative of deBuren, as web text, podcast and e-book in English, French, Dutch and Italian.